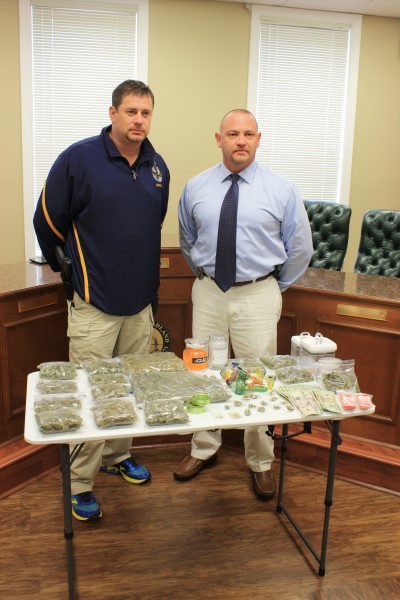 A routine traffic stop on Hwy. 431 in Headland last week yielded almost three pounds of marijuana and paraphernalia. The arresting officer, Sgt. Tony Smith, left, and Headland Chief Mark Jones presented confiscated items during a press conference Monday. The three had been in Georgia and were returning to Panama City Beach to sell the pot.  They are currently spending spring break in the Henry County Jail.

Three Panama City Beach residents are in the Henry County Jail on drug charges after a traffic stop revealed they were transporting marijuana.

Jones said the traffic stop on two violations yielded 2.7 pounds of marijuana and numerous items of drug paraphernalia. Other charges, involving unlawful possession of a controlled substance, may be forthcoming.

Jones said the three were on their way from Georgia back to Panama City Beach, where the marijuana would have found its way into the large number of spring breakers there at this time. "This amount... you don't see it every day," Jones said. "With spring break we see a high increase of traffic and traffic violations. Unfortunately, this was going to be sold on the streets."

The chief said he was very proud of the bust and the work of Headland Police Sgt. Tony Smith. "I believe we've got some of the best officers around. To them, this is more than just a job." He also thanked the Henry County Sheriff's Department for backing up Smith on the scene, saying this should show the county's law enforcement officers are working together for the good of its residents.