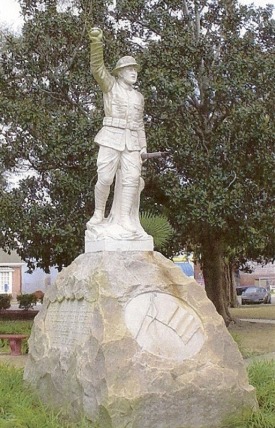 In the center of Town Square, bounded by Main, Park, Grove and East Church Streets.

The inscription on the south side of the boulder reads:

Unlike the identical statues at Eufaula, Alabama, and Clarksville, Tennessee, this statue faces sideways (west) on its rounded boulder mount.

This is one of five known stone designs similar to Viquesney's "Spirit of the American Doughboy" but which lacks the full battle gear. They are all thought to have been made by McNeel Marble Company of Marietta, Georgia, and at least one was misrepresented as a Viquesney Doughboy in a sales pitch to the town of Clarksville, Tennessee.

While researching the history of the Clarksville, Tennessee stone Doughboy, reporter Alane S. Megna of the Clarksville Leaf-Chronicle received a file, Henry County Siftings By T. Larry Smith Vol. II, No. 45, from one of her Headland, Alabama contacts. The text below is based upon it, with new information pertaining to the statue's suspected actual composition and origin.

The monument was erected by the United Daughters of the Confederacy, Headland Chapter #1673, who first discussed the idea of a statue for Headland's Public Square in a 1925 meeting. The statue idea was attributed to Mrs. Mollie Lindsey at that meeting. Mrs. Alice Oates, widow of Dr. Wyatt S. Oates and affectionately known as "Queen" Oates, suggested the project move forward. Mrs. Oates was made chairperson of the monument committee at that meeting. The cost of the project was around $4,000 with the money coming from local businesses, citizens and from Mrs. Oates.

The statue was supposedly sculpted by "Italian craftsmen in Italy and carved from the finest Italian marble", but as the experience with Clarksville<, Tennessee's identical statue suggests, it's likely that Headland's sculpture is made of local Alabama or Georgia marble, as are probably all of the three known genuine signed Viquesney stone Doughboys. Unfortunately, Viquesney was known to have misrepresented the quality of his products, and the materials used. It is suspected that Headland's statue was fabricated by McNeel Marble Company of Marietta, Georgia, a firm Viquesney is known to have used in producing his signed stone Doughboy at Madison, Georgia, and was the same company that Clarksville, Tennessee bought its statue from.

The large, rounded boulder base the statue rests upon was carved from Georgia granite. The statue itself was supposedly shipped from Italy to the port of New York City, and from there to Americus, Georgia, arriving in Headland on Monday, June 14, 1926, but it was probably carved by, and came from McNeel Marble in Marietta, Georgia.

The planned unveiling and dedication of the statue was to be on Confederate Memorial Day, in April. However, the statue was several weeks late in arriving from "Italy", so the dedication ceremonies and unveiling were held on Thursday, June 17, 1926 on the square. (The citizens of Clarksville, Tennessee were given a similar story; they were told there would be a six-month wait for the marble for their statue to be shipped from "Italy". But during a 2009-2010 restoration and move, a sample was analyzed and found to be "partly metamorphosed limestone in its last stage before becoming marble", and most likely native to Alabama or Georgia.)

The unveiling ceremonies and the presentation of the statue to the town of Headland was at 3:00 p.m.; the Henry County American Legion post assisted the U.D.C. with the celebration. The square was decorated with flags by local merchants. The Newville town brass band provided the music.

The program proceeded with a bugler. The invocation was read by Rev. B. M. Herlong, and the presentation of the statue to the town was by Mrs. A. W. Hawkins, Historian of the Headland U.D.C. The acceptance of the statue for the town of Headland was by T. B. Woods. A musical score was next by the Newville Brass Band. Then a series of five minute talks by several Headland citizens ensued. More good music followed. The dedication speech was to be delivered by Col. Bibb Graves (later Gov. of Alabama). He was unable to attend, so Rev. J. E. Shafer, Pastor of Lafayene St. Methodist Church in Dothan spoke in his place. The speech centered around the Civil War and WWI. Next came the assembling of the crowd around the statue and the unveiling was next. Then came taps played by a bugler. Next the Newville Brass Band played Dixie. The benediction was by Rev. J. L. Funderburk. The program was enjoyed by all, and a large crowd was present.

During the unveiling process, Mr. John Henry Spivey, a Confederate soldier, and his youngest son Ted Spivey, a WWI veteran, both attended wearing their respective military uniforms. They were asked to step forward for the unveiling. Mr. J. H. Spivey was a grandfather of Mr. Boyce Adams of Headland.

In more recent times the rifle was stolen from the statue, but was later replaced. The statue has held up rather well in Headland's hot and humid climate.

Article is courtesy of THE E.M. VIQUESNEY DOUGHBOY DATABASE